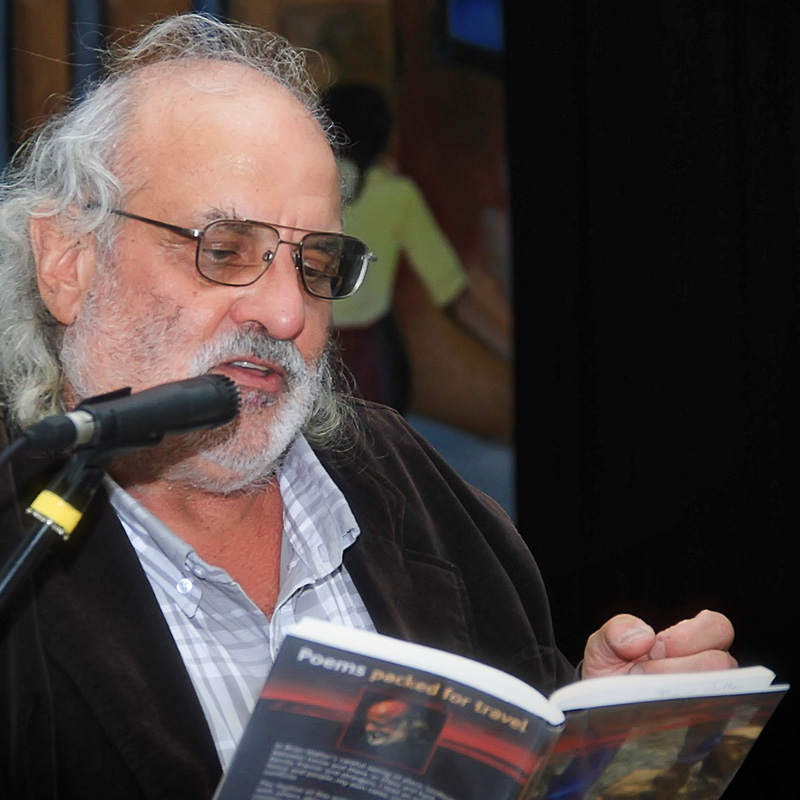 Ecca is an informal group of poets, mainly from the Eastern Cape, South Africa. Their name derives from the Ecca Pass on the R67, which connects Fort Beaufort and Grahamstown. It consists of a group of colleagues and friends who get together to work on poetry projects. They have been active since the late 1980s, when the founders of the group worked at the University of Fort Hare. They have managed to produce and publish a joint collection of their poems on a more or less annual basis. Between 2015 and 2018 guest poets were invited to contribute to these publications, and subsequently became permanent members. They will all participate in this year’s reading.

Most of the poems we bring to the festival were featured in last year’s Ecca anthology, which is also called Throw In Your Song. They share a profound sense of connection—deeply troubled at times, but always vivid and memorable. They speak of the gravitational pull towards friends, lovers, parents and children; but also of the pull towards other species, mountains, rivers and trees. They embody deep conversation, however difficult it sometimes is. This sense of community is heightened by the collective presentation: the poems resonate in conversation. They pay homage to inner and outer landscapes at moments which, however challenging, hinge us into song, and into belonging.

Eduard Burle received a Masters Degree in Creative Writing from the University of Cape Town in 2002. Since 2005 he has been a regular contributor and reader of poems at Off the Wall, a poetry group that meets at A Touch of Madness in Observatory, Cape Town. He is a member of the ECCA Poets group, and was invited to be the guest poet for the ECCA Poets’ 2015 publication Sound Piping. Together with poet and friend, Jacques Coetzee, Eduard Burle had the honour of being asked to do a reading of the late Norman Morrissey’s poems at the McGregor Poetry Festival in 2017. He also participated in the ECCA group readings at McGregor in 2017 and 2018. Eduard works in a bookshop in Cape Town. His poems have been published in New Coin, New Contrast, Stanzas, and in Patricia Schonstein’s Africa! anthologies.

Jacques Coetzee is a musician and a freelance editor. He matriculated from the Pioneer School for the Blind in Worcester, and completed a master’s degree in creative writing at the University of Cape Town, for which he submitted a manuscript of poems called Singing Through. Since 2007 he has been the singer and one of the main songwriters in the band Red Earth & Rust, which released its fourth album of original material in 2015. He has published poems in New Contrast and in Patricia Schonstein’s 2014 anthology, Heart of Africa! Poems of Love, Loss and Longing. In January 2018 he and Barbara Fairhead launched their joint anthology of poems, The Love Sheet, which was published by Hands On Books, an imprint of Modjaji. A new manuscript of poems, tentatively entitled Unscripted Music, is being considered for publication.

Olwethu Mxoli from Uitenhage, Nelson Mandela Bay, is the 2018 guest poet in the Ecca group. She writes and performs poetry, and has published with the Nelson Mandela University publications from 2014 to 2017. She works with the Helenvale Poets team as a facilitator, and runs creative workshops. Olwethu was born in Port Elizabeth in 1995. She spent most of her childhood travelling between Port Elizabeth, Uitenhage and Kirkwood. She was raised predominantly by her grandmother; seeing her parents on weekends and school holidays. It is her grandmother who nurtured her love for reading, and later for writing. She was published in three of NMMU’S poetry collections: Beneath the Bridge of Metaphor in 2014; Poetry, piece by piece in 2015, and ‘Carved onto the Page’ in 2017. She has also had one of her poems published in the national poetry textbook, ‘Voices of the land’. Olwethu is also a performance poet and was awarded the Performer of the Year in the poetry category at the 2017 NMU Achievers Awards.

JOHN VAN WYNGAARD I’m approaching the years of my maturity, I think, and spent most of the previous ones reading and teaching literature, mainly poetry, at university in Kwa-Zulu Natal. I’ve read and taught much more than I’ve written, but have hugely enjoyed this new phase of working words into these shapes, approaching new expressions and meanings. Working with Ecca has let air and light into spaces I haven’t been faithful enough to. I live as simply and sweetly as I can, in a small Karoo town, trying to love and be better.

Brian Walter was born in Port Elizabeth, in 1956, and taught at Chapman Senior Secondary School in Gelvandale, PE, and at the University of Fort Hare, Alice. Currently he works on a community development project, mentoring the Helenvale Poets in Port Elizabeth, and has assisted in the publication of their 7 books. He also works with the informal Ecca group of poets.

His poetry collections are:

Otherwise and Other Poems, Echoing Green (2014)

Allegories of the Everyday, Dryad (2019)

His books include Groundwork: An Introduction to Reading and Writing about Poetry, Macmillan Boleswa, Manzini (1997), which he wrote with Felicity Wood. He has also edited and compiled texts for schools. He has won the 1999 Thomas Pringle Award for poetry published in journals and the 2000 Ingrid Jonker Prize for Tracks, as well as national and provincial awards for Arts and Culture.